As far as Windows is concerned, the GPU is real hardware and can be treated as normal, so we will not go into too much depth. Most of the work lies on the Linux side, where we must do some work to make sure the GPU is free for the VM to use, and then instruct the hypervisor to use it. Again, we will be using the standard QEMU/KVM setup, managing our virtual machines with libvirt.

Naturally, the same procedure here can be used for any other PCIe device, such as NVMe SSDs. Let’s begin!

IOMMU is a hardware feature and requires support from both the CPU and the system firmware. If you have anything remotely recent, like AMD Bulldozer or Ryzen CPUs and Intel Core i3/i5/i7 CPUs, you almost certainly have support.

This setting is controlled by the UEFI firmware (commonly still called “BIOS”). Usually, you want to go into the UEFI firmware settings and enable the feature. It may be listed under names like IOMMU, Intel VT-d, AMD-Vi, or any other such names. It’s often buried deep in some menus, so you have systematically search through all the menus. Unfortunately, like enabling hardware-assisted virtualization, this is highly dependent on the motherboard, and oftentimes, also undocumented. You are on your own here, but it should not be too hard.

Once the feature is enabled in the UEFI firmware, you’ll need to enable it via a kernel command line flag. Typically, this is done by adding the flags to the GRUB_CMDLINE_LINUX line in /etc/default/grub. For Intel CPUs, you want to add intel_iommu=on, and for AMD CPUs, you want to add amd_iommu=on. You often want to add iommu=pt as well to avoid issues with devices that you are not passing through. Once done, the line should look something like (where ... represents other flags, if you have them):

Once this is done, you’ll need to regenerate the grub configuration. On Debian and derivatives, this would be sudo update-grub. On Arch, this would be sudo grub-mkconfig -o /boot/grub/grub.cfg. If you are using any other distribution or bootloader, follow its documentation.

After enabling IOMMU, we must identify the PCIe device we want to pass to the virtual machine. We also need to check which IOMMU group it is in. To do this, you can use this script:

Save this as iommu.sh and execute it via bash iommu.sh. For example, this is what my GTX 1060 show up as:

As you can see, the GPU and its corresponding audio device are the only devices listed in IOMMU group 29. This is the ideal scenario, and this GPU can be passed through without any issues. If you are passing through any other device, it should also be in its own IOMMU group. Sometimes, you’ll see a “PCI bridge” device in the IOMMU group. This is fine and you can also proceed.

If you see any other devices in the IOMMU group, you may need to go into your UEFI firmware settings and enable a feature called ACS. This may result in a better IOMMU group. If this is not possible or did not help, then you will need the ACS override patch. Using it degrades system security and is out-of-scope for this post, though instructions are readily available via Google. Once this patch is applied, all the devices will be broken up into their own IOMMU groups.

Note that you may have some trouble if you have multiple devices with the same IDs, for example, if you have two GPUs of the same model. In such cases, you can attempt to distinguish them by subsystem ID, which you may view via lspci -s [PCIe address] -nnv, where the address is something like 0c:00.0 in the example. If you can’t, then you are on your own. This section on the Arch wiki may prove helpful, if you know how to adapt it to your distribution.

To give any PCIe device, such as a second GPU, to a virtual machine, it must first be unused by the host machine. Otherwise, sheer chaos ensues as two sets of drivers attempt to control the same device. While libvirt has decent support for unloading the host machine drivers before passing a device to the virtual machine, this is has some quirks. For example, if the GPU is currently being used (sometimes unwittingly), the process that’s using it must be stopped before the virtual machine can start. This is not worth the trouble, so it’s usually easier to mark the device for passthrough at boot time, preventing anything else from using it.

To achieve this, we isolate the device at boot time by binding the device to the vfio-pci kernel module. This is a four-step process:

Adding the device to the virtual machine

At this point, all the hard work is out of the way. All you need to do now is to start virt-manager and edit the virtual machine you created in part 1: 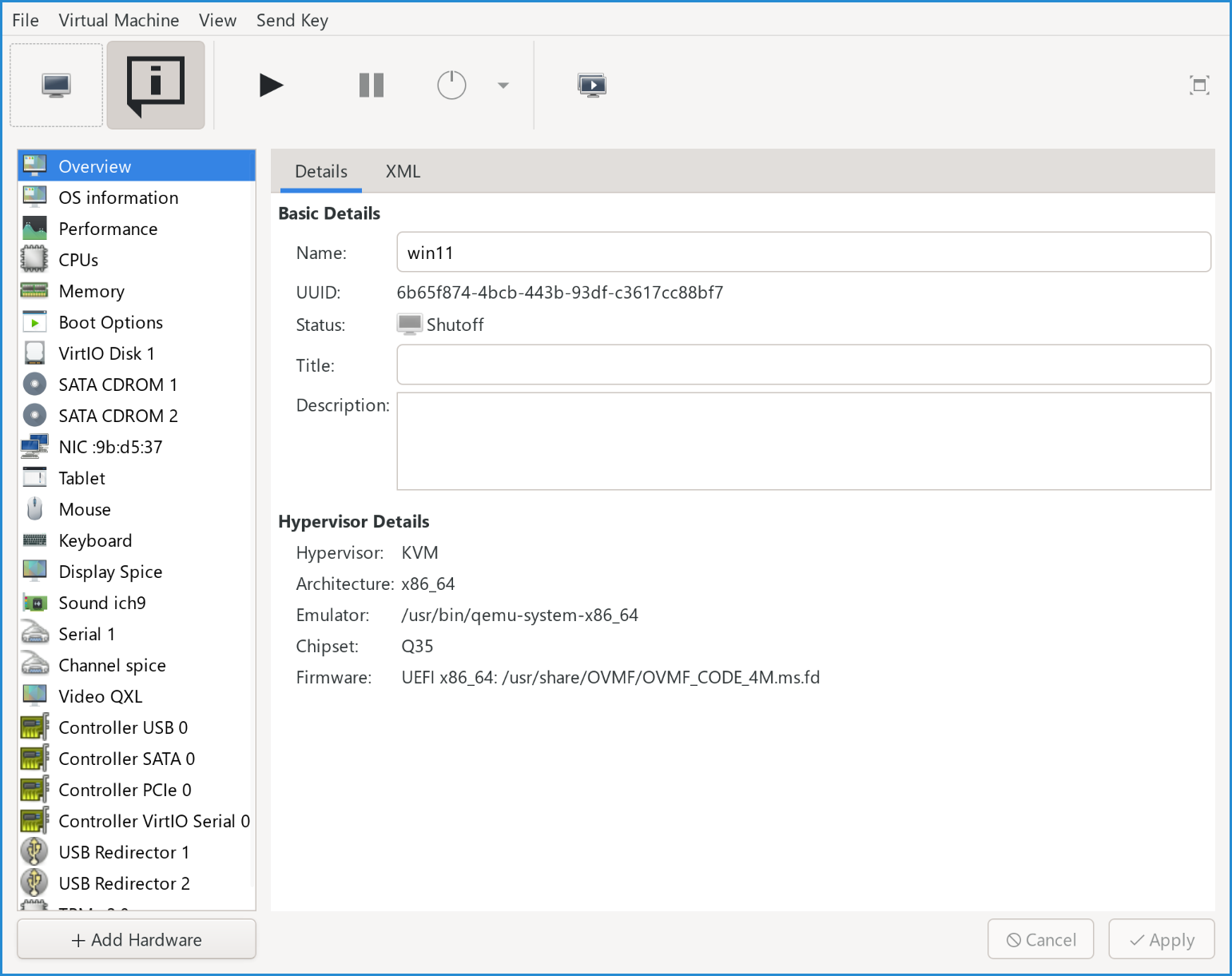 Click , then go to “PCI Host Device” and select the desired device. In our example, this is the 1060: 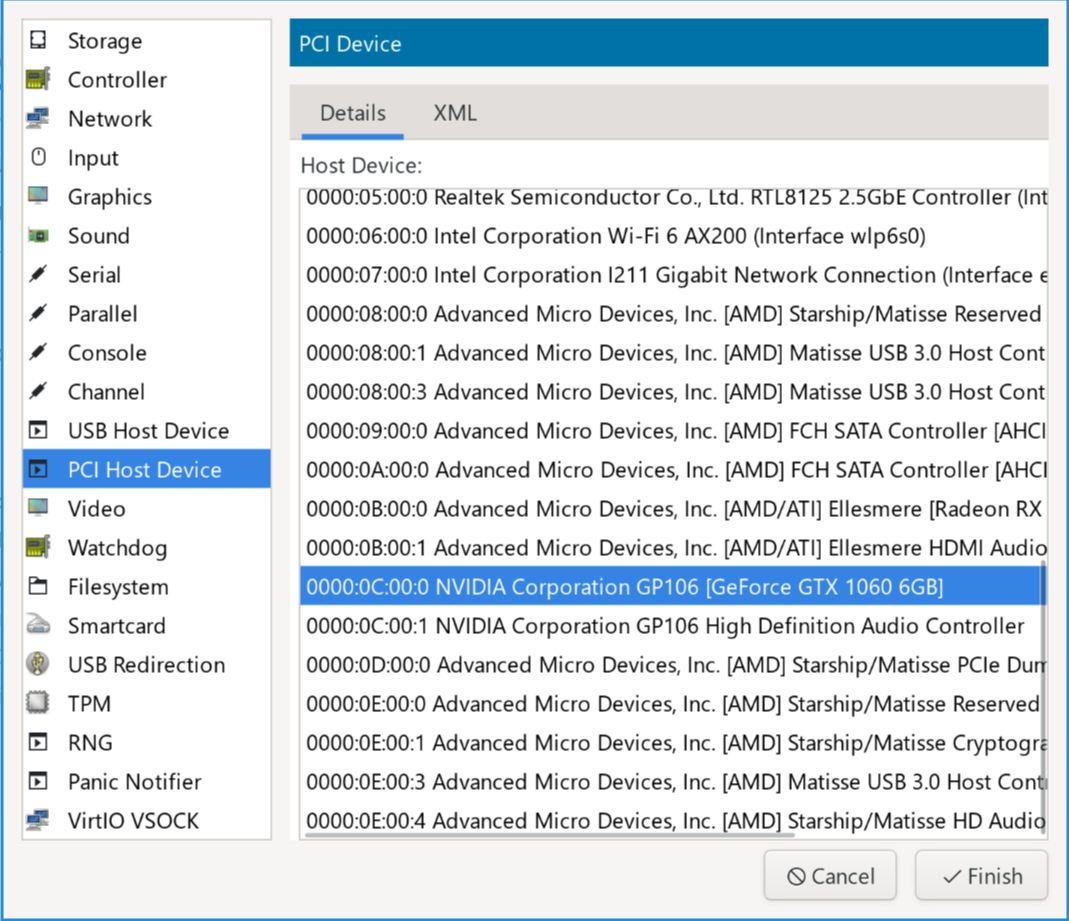 For GPUs, remember to repeat the process for its corresponding audio device.

Once you are done, you can start the virtual machine. The GPU should be detected as a new hardware device, just as if you had a Windows machine with a new GPU plugged in. At this point, you install drivers for it: 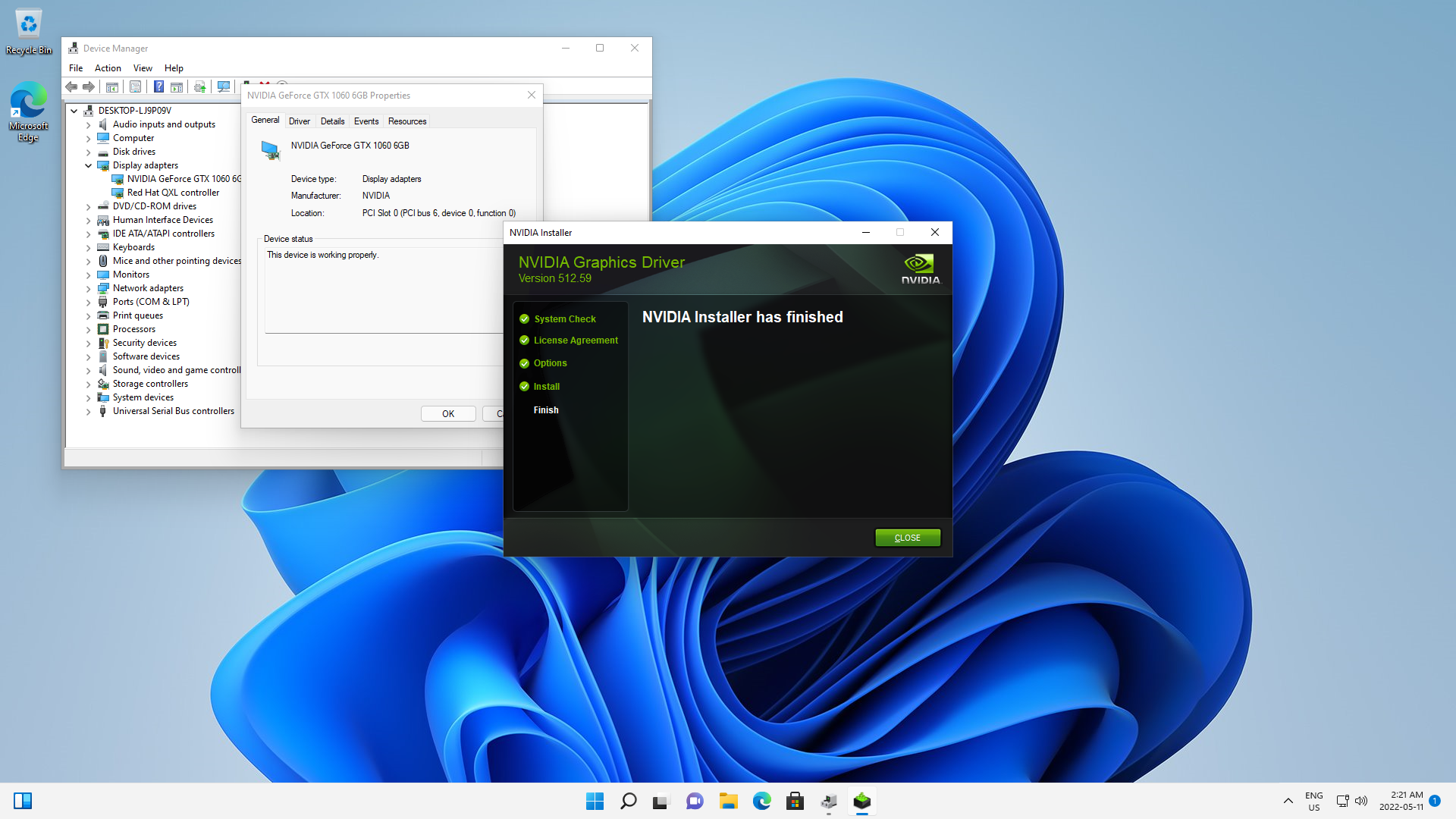 Once that is done, if you plug in a monitor, you should be able to use the Windows desktop on that monitor and play games with hardware acceleration.

Next time, we shall look into installing Looking Glass and integrate the virtual machine into the Linux desktop properly.

My name is Guanzhong Chen, also known by my username, quantum.

I am a software engineering student at the University of Waterloo, and co-founder of DMOJ, the most popular programming contest platform in Canada.